Following has been the ongoing NEET 2018 age limit saga.

All students are hereby informed that NEET 2018 shall have lower as well as upper age limits.

A candidate should have completed 17 years of age as on December 31 of the year of admission.

Proof of final decision on age limit for NEET 2018 is as follows. 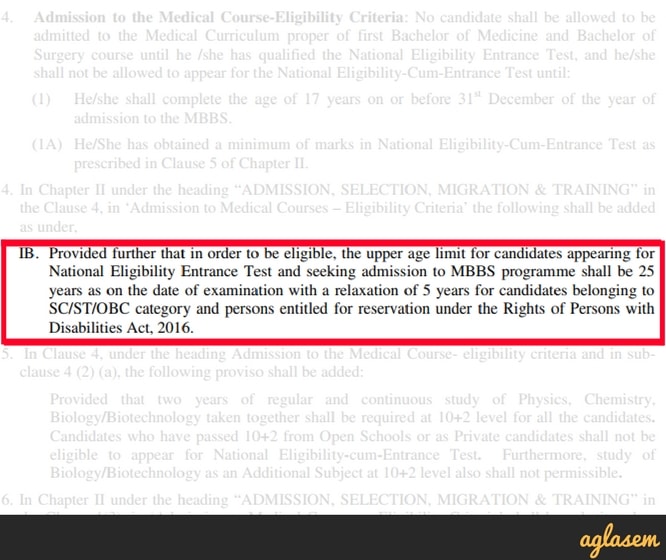 Provided further that in order to be eligible, the upper age limit for candidates appearing for National Eligibility Entrance Test and seeking admission to MBBS programme shall be 25 years as on the date of examination with a relaxation of 5 years for candidates belonging to SC/ST/OBC category and persons entitled for reservation under the Rights of Persons with Disabilities Act, 2016. 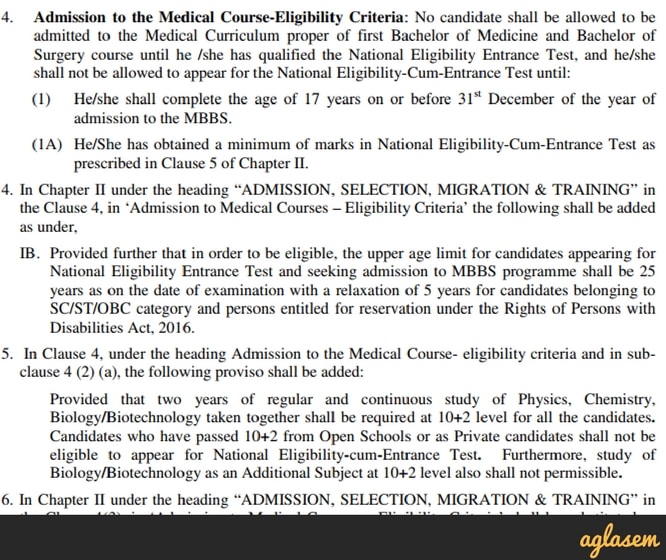 On this topic, there have been a lot of controversies.

Here is what happened previously, before the above gazette was published.

To start with, keep in mind that the lower age limit to appear in NEET 17 years. Admission seeker should be at least 17 years old as on admission or as on 31st December of year of MBBS/BDS admission. Only 17 years or older students should apply.

The age limit for NEET 2018 has been a raging question ever since an upper age limit was introduced last year (and then removed, and now again re-introduced).

In November 2017, an aspirant had reached out to the competent authorities through Cpgrams – Public Grievances and asked “I want to know a information related to NEET UG. Is there any upper age limit for appearing in NEET UG as of now“.

This query was received by the Department of Health and Family Welfare that responsed on 14th December 2017 with the response “The upper age limit for appearing in in NEET UG is 25 years from the academic year 2018-19.”

A screenshot of the correspondence was tweeted and the same is shown below. 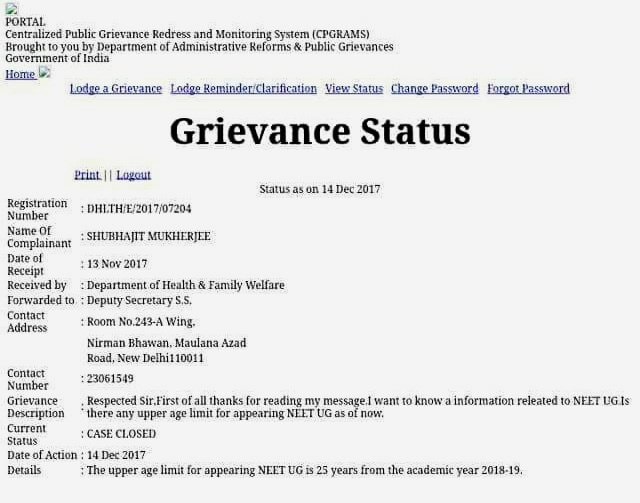 You can read RTI in question below. 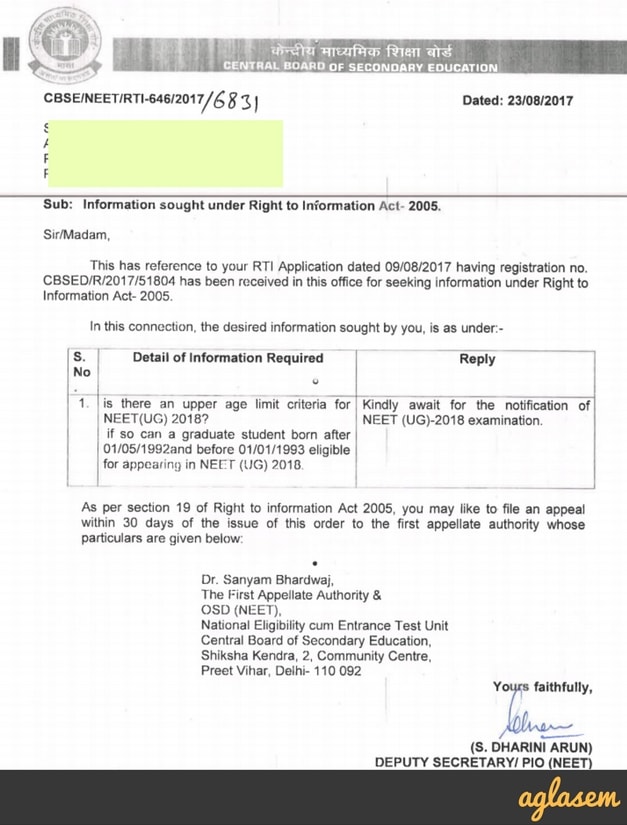 With so much going on around NEET, it was advised that it would be better for all concerned to follow final decision on NEET 2018 Age Limit only after CBSE releases NEET 2018 information brochure.

CBSE had released NEET information brochure on February 5 last year. But it is important to note that last year there was a delay in the overall process. Prior to that year, brochure for NEET / AIPMT was released in mid-December.

The upper age limit, an age limit of 25 years (upper age limit) was introduced last year. The information brochure of NEET for year of exam stated “The upper age limit for NEET is 25 years as on the date of examination with a relaxation of 5 years for candidates belonging to OBC/SC/ST category. (As per letter no. U.12023/16/2010- ME-II dated 17.01.2017 received from MoH&FW)”.

However, soon after the publication of this age limit for NEET, it was met with a lot of opposition. The Supreme Court of India asked MCI to look into it, to which MCI had said that in its opinion, young have better ability to grasp knowledge and those below 25 years of age are more capable of studying medicine.

Another logic in support of having an upper age limit is that a student who has just passed class 12 has to compete with much older students who have been preparing for medical entrance exams for several years. This is unjust to younger students and hence there should be a maximum age cap.

However, the Supreme Court had ruled that there will be no upper age limit for candidates who will appear for NEET 2017. Form dates were also extended to let students, who could not apply earlier due to age limit, apply.

An interim order stated “As we, prima facie, find such an age limit could not have been determined by way of a notice on the basis of the instructions issued by the Medical Council of India, it is appropriate to direct that all the desirous candidates will be allowed to fill up the forms on the online portal of the CBSE on or before April 5, 2017.”

To answer that, MCI’s gazette dated January 23, 2018 can be referred. It clearly states that there is an upper age limit. Students can consider that this verdict will be valid for this year and hence only those who fulfill upper age limit (25 years / 30 years) can apply and prepare for NEET 2018 and NEET 2019.

Note – Candidates who are going to appear for the NEET 2018 and NEET 2019 should be in touch with all the recent updates regarding the age limit and other requirements which will be available on the official website of CBSE or MCI/DCI.

If you have any queries on NEET 2018 Age Limit, please ask in the comments section below or at discussion forum.

NEXT (National Exit Test) – What Is NEXT? How And When Will It Be Implemented?

No Result
View All Result