JIPMER 2019 Admit Card has been issued by Jawaharlal Institute of Postgraduate Medical Education and Research on its official website, jipmer.puducherry.gov.in. The admit card for JIPMER 2019 is issued on May 20, 2019 only to those candidates whose JIPMER 2019 application form was submitted successfully. Admit Card is to be used for verification purpose at the exam hall. Along with the admit card, there are other important documents also which the student has to bring to the exam hall. The students must keep it safe with them. Read this page to know about JIPMER 2019 Admit Card and other related information about it.

Latest: JIPMER 2019 Admit Card is now available. Access the link from below.

The students who will be appearing for JIPMER 2019 must know that they will not be allowed to appear for the Exam if they do not bring the admit card with them to the exam hall. Scroll down further to know all the details about Admit Card.

We have received some comments regarding the downloading of JIPMER 2019 Admit Card. Candidates will not be able to download the admit card. We have contacted the authorities regarding this issue. On a telephonic conversation, it has been confirmed that the issue will be resolved by evening. Candidates are advised to visit this page for more latest updates.

Those students who have filled the JIPMER 2019 Application Form on time are eligible to download the  Admit Card. To download it, they will have to follow the given steps in sequence:

Step 2:  A new login window will open up. Here the candidate will have to enter the ‘User ID’ and password as per the login details which they got during the application process. The image below shows where the login details must be put to download admit card. 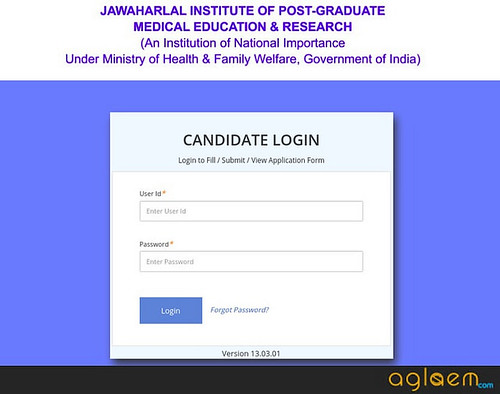 Step 3: The Admit Card will be available for download. Students are advised that they take 2-3 printouts of the admit card and keep it intact for future use.

The eligible students who get the Admit Card must check that the following information is present on the  Admit Card clearly:

An important thing which the candidates have to remember is that no request for a change in the test city will be entertained. The JIPMER 2019 aspirant will have to give the exam at the allotted test centre only. Also, any other change in the rest of the details will not be allowed once the exam center and the admit card has been given.

What are the Important Documents to be brought on the Day of Exam?

There are some other important documents along with the Admit Card, which the students have to bring to the exam hall. This is important for the student because they will not be allowed to enter the exam hall if they do not have the required documents with them.

Check the list of all the important documents which the JIPMER 2019 Aspirants have to bring with them to the exam hall:

What are the valid Id proofs?

The students appearing for JIPMER 2019 can bring any of the below mentioned documents along with them as a valid Id Proof:

Any other document apart from the above mentioned will not be accepted and thus the student will not be allowed to take the JIPMER 2019 Exam.

Students who are from Assam, Meghalaya, and Jammu & Kashmir can bring the following documents with them to apart from the above-mentioned documents. These will be accepted at the exam:

Admit Card is a very important document for the students who will be appearing for this exam. The  Admit Card will be used for the verification purpose at the exam hall. Verification means that the identity of the candidate will be checked that the right candidate only has appeared for the exam.

Note: Candidates also must note that they should get the signature and seal on the admit card from the invigilator before leaving the exam hall.

NEXT (National Exit Test) – What Is NEXT? How And When Will It Be Implemented?

No Result
View All Result